The climate is changing, and sports pitches, golf courses and municipal parks have to adapt.

Deep-rooting, drought-tolerant turf grasses such as 4turf® (turf tetraploid perennial ryegrass) are able to survive spring and summer droughts. Even better, 4turf® stays green and playable with less need for irrigation during long dry periods when water may have to be rationed.

As spring and summer droughts become more common, and water becomes a more scarce resource, turf managers need to look for new ways of maintaining lush green grass all summer long. The solution is to sow drought-tolerant tetraploid varieties from our 4turf® range.

4turf®’s ability to withstand drought eases the pressure on turf professionals. They get more playing hours, yet spend less time watering or maintaining their turf. 4turf® saves time and money.

We know exactly how 4turf® performs because we tested a number of varieties in Denmark’s state-of-the-art root-screening facility, RadiMax.  The results show that tetraploid ryegrasses outperform diploid ryegrasses for drought-tolerance. At RadiMax we saw how deep their roots reached, and how green the turf remained when the plants were starved of water.

The secret is in the springtime speed with which 4turf® varieties quickly develop their strong roots. Compared to diploid ryegrasses, 4turf® has a quicker root growth and development of a larger root mass in the upper layer of the soil, and it has a higher above-ground drought-tolerance. This makes 4turf® an excellent choice for surviving both spring and summer droughts.

Green grass all year round with 4turf®

4turf® varieties are clear winners when it comes to drought. Their ability to quickly establish their root mass in the spring is the best protection against a spring drought. Later in the season, their above-ground drought-tolerance combines with their strong root mass to give excellent resistance to a summer drought. Trials conducted in France and the Czech Republic confirm that, after a summer drought, tetraploid 4turf® plots look far greener than those of diploid ryegrasses. 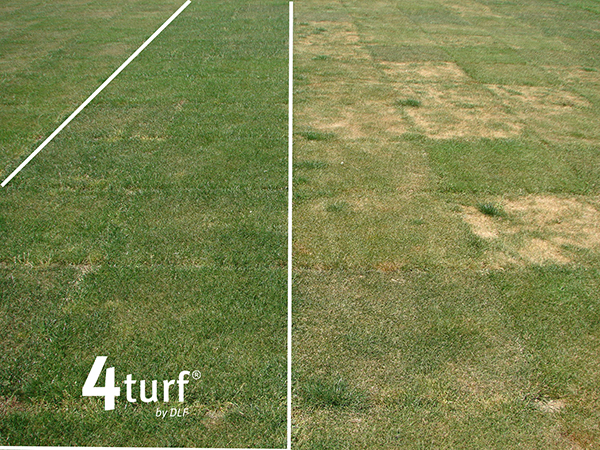 Drought-tolerant 4turf® has a wide range of applications. On golf course fairways, for example, where irrigation is often not an option, overseeding with 4turf® produces a better quality summer turf. It’s the same with sports facilities, parks, and ornamental lawns in public locations. Wherever there is a need to keep turf green and playable and green throughout the droughts of spring and summer, 4turf® is the solution.